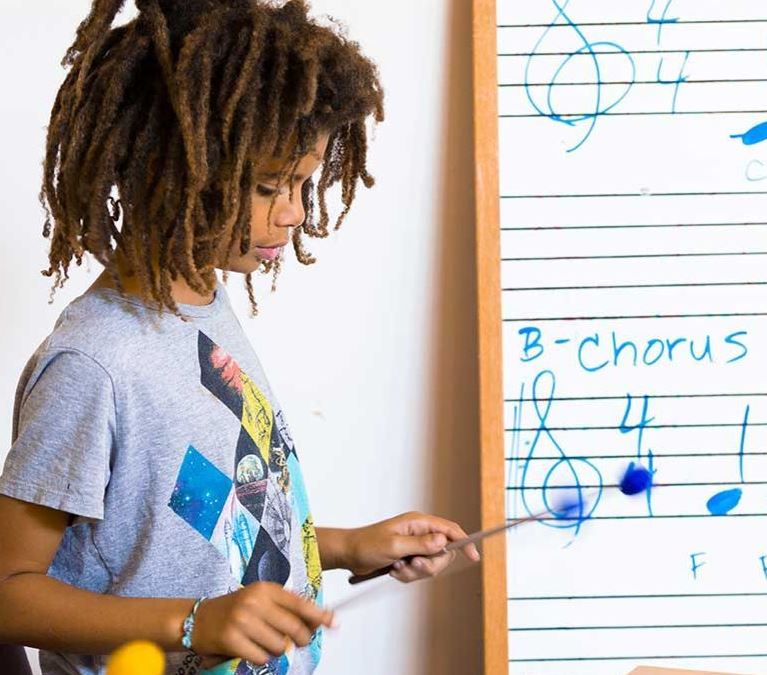 Music classes in Barrie Montessori are based on the Orff-Schulwerk approach to music education, in which teacher and students interact as partners in music-making. Singing, moving, dancing and playing instruments are treated as regular ensemble experiences. The Orff-Schulwerk approach to music education was carefully chosen in order to closely reflect the type of hands-on learning practices in the Montessori classrooms and Barrie School as a whole. The Orff-Schulwerk allows for active music-making for all age-groups and abilities, along with an historical and theoretical music education. Following the example of 20th Century composer Carl Orff, this approach builds musicianship through the integration of music, movement, speech, and drama. It complements the Montessori curriculum because the students begin their music lessons with what they do naturally: play, imitate, experiment, problem-solve and express themselves in a natural way. Actual skills for each age are benchmarked against the National Standards of Music Education in America, which were created with the input of leading teachers of the Orff-Schulwerk.

An Orff-Schulwerk program is naturally influenced by the background and interests of both student and teacher. At Barrie, the source material for the music classes comes primarily from world and art music, and from the folk music of the cultures represented by the students themselves. There is also a strong emphasis on North American folk music, anchoring students to the rich musical heritage of the country in which they live. Xylophones, glockenspiels, drums of all types, simple stringed instruments, woodwinds (all voices of recorders, Native American-style flutes) and unpitched percussion instruments, both symphonic and ethnic in nature, are used to enhance the classroom World Music experience, which supports the cultural studies that are so important in the Montessori classroom. Such studies are further supported with listening lessons/movement opportunities using symphonic, vocal, jazz, and ethnic recordings.

Throughout Barrie Montessori, vocal and instrumental music, along with movement and dance, are combined with dramatic elements in order for the students to see the music as an expression of the human experience. Students from the Primary Division through 5th grade experience making music as part of story-telling. In Primary classes, students act out seasonal songs and classic children’s tales, choosing their level of involvement as musicians, singers and actors. These lessons are spontaneous in nature and ‘performed’ inside their own music room in order to allow every student an emotionally safe place to experiment. Elementary students continue to engage in the emotional and dramatic elements of their weekly music-making in a similar fashion. In the spring semester, the students produce a full ‘theatrical and musical’ performance of an authentic folk-tale inspired by the country and/or continent from that year’s Montessori curriculum, using authentic songs, music and dances to enhance the story. All pieces chosen have relevance to the music curriculum of each grade level.

Students have music two-three times per week in the following schedule:

In Barrie Montessori, formal Visual Arts lessons begin in the Primary Division at age three. Students are introduced to basic skills, tools, and materials in order to start exploring the world of the artist. We use books in the classroom to explain the different elements of design and the process of making art. Each student is able to use the materials provided to express himself/herself freely within the guidelines of a project. Students are encouraged to use their imagination and to focus on the process of creating an artistic piece, instead of a final product. As the students enter into the Lower Elementary Division, they begin to build on their foundation of art skills. They learn to appreciate specific artists and techniques through projects and peer discussion. Group projects build community and foster an appreciation toward the common goal of creating public art works. In the Lower Elementary Division, students begin to discuss emotion and mood through their artwork. As our students progress into the Upper Elementary Division, these skills continue to build, allowing students to gain independence in their work. They are able to compare and contrast their own work and that of master artists, experiment in multiple techniques within one project, demonstrate quality craftsmanship, and identify cultural associations through visual imagery.

Developing an aesthetic sense, taking risks with creative expression, and understanding the visual world inspire our students. Art history, integration of grade-level studies and creative experiences in the classroom are also an important part of the program.

In the Arts program, the students are able to build their skills throughout the year and continue to grow as they progress to the next level. As a whole-school Visual Arts Department, we discuss our 5th and 6th grade curriculum to make sure the progression is natural and appropriate.